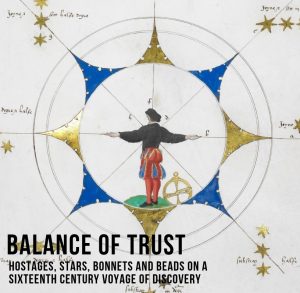 How does one credit someone or something as reliable and trustworthy? By what measure can honesty be adjudicated and dishonesty punished? How can one confidently approach strangers who could not be vouchsafed by any accepted criteria of reliability and trustworthiness? What was the measure of trust and how might it be maintained? The 1529 Voyage of Jean Parmentier from Northern France to Sumatra will guide us as we pursue the practices, skills, and improvisations that constituted the precarious balance between trust and betrayal, profit and loss, life and death. By following the trajectory of Parmentier’s ships as they crossed perilous waters to meet and trade with unknown peoples on the other side of the world, we will encounter and try to understand the strategies he employed to negotiate trust, whether between officers and crew, ships and seas, or French merchants and Minangkabau spice traders.

Michael Wintroub is Professor at UC Berkeley’s Department of Rhetoric. He is author of The Voyage of Thought: A History of Translation, Commerce and Discovery in Early Modern France (Cambridge, 2017), winner of the 2018 Pickstone Prize; and A Savage Mirror: Power, Identity and Knowledge in Early Modern France (Stanford, 2006) and He has published widely in journals such as the American Historical Review, the British Journal for the History of Science, ISIS, the Renaissance Quarterly, and Annales: Histoire, Sciences Sociales, and has received numerous awards and honors, including grants from the NEH, the ACLS, the Mellon Foundation, Norway’s Institute for Advanced Studies, and the Sixteenth Century Society, where he is a two-time winner of the Nancy Lyman Roelker Prize.

Co-Sponsored by the History Department and Early Modern Studies.