Past Speakers
About Stephen Straker 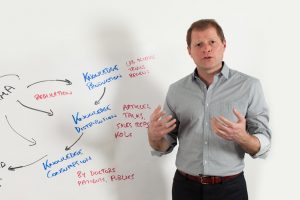 The themes for this talk are drawn from Professor Sismondo’s recent book, Ghost-Managed Medicine, about the regimes of knowledge and power in the modern medicine.  Here’s a portion of the description of the book: “Most agents for drug companies aim to tell the truth, but the truths they tell are drawn from streams of knowledge that have been fed, channeled and maintained by the companies at every possible opportunity. Especially because those companies have concentrated influence and narrow interests, consumers and others should be concerned about how epistemic power is distributed – or ‘political economies of knowledge’ – and not just about truth and falsity of medical knowledge.”

Sergio Sismondo is the author of Ghost-Managed Medicine: Big Pharma’s Invisible Hands (Mattering Press, 2018), An Introduction to Science and Technology Studies, 2nd ed. (Wiley-Blackwell, 2010), The Art of Science (with Boris Castel) (Broadview Press, 2003), and Science without Myth: On Constructions, Reality and Social Knowledge (SUNY Press, 1996). With Jeremy Greene, he edited The Pharmaceutical Studies Reader (Wiley, 2015). He is editor of Social Studies of Science, one of the leading Science and Technology Studies journals in the world. 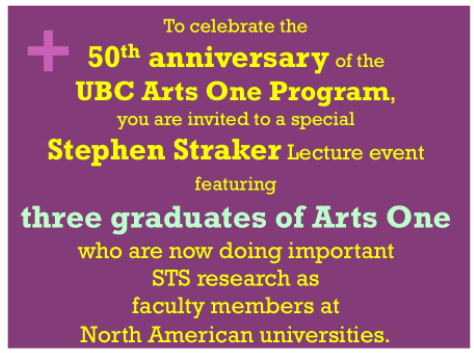 This year, in order to kick off the celebrations of the fiftieth anniversary of the UBC Arts One Program, STS@UBC has a special Stephen Straker Lecture event featuring three graduates of Arts One who are now doing important STS research as faculty members at North American universities.

The event will feature brief research talks and a panel discussion.

General Topic: Pathways and Trajectories: Arts One, STS, and a Liberal Arts Education

Lindsey Richardson (Sociology, UBC): “From Durkheim’s Institutionalism to the Downtown East Side”

Janet Vertesi (Sociology, Princeton): “From Leviathan to the Mars Rover”

Audrey Yap (Philosophy, UVic), “Evidence and Bias: Science Tells You How to Clone a T-Rex but Arts Tells You It’s a Bad Idea” 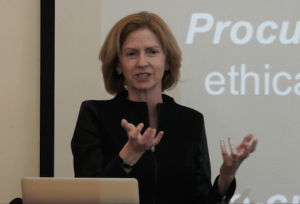 Thompson’s talk looks at biometrics, egg freezing, gene editing, and bio-wearables, and compare and contrast elites’ and less privileged users’ interactions with these embodied technologies. She considers how these technologies both naturalize and trouble the idea of meritocratic elites.  She draws on STS, history of science, and on feminist, critical race, and disability scholarship to make the argument that the study of embodied technologies shows us that technical inequality—and consequently, substantive political inequality—has been growing alongside recent increases in income inequality.

Charis Thompson is Chancellor’s Professor and Chair of Gender & Women’s Studies, and a former founding director of the Science, Technology, and Society Center at UC Berkeley. She has a BA from Oxford University, and got her Ph.D. from the Science Studies program at UC San Diego. Before coming to Berkeley, she taught in the Science and Technology Studies Department at Cornell University, at the University of Illinois at Urbana-Champaign, and in the History of Science Department at Harvard University. 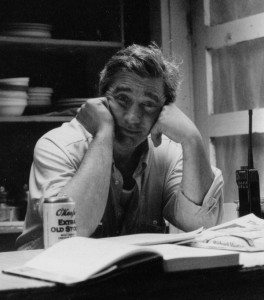 Stephen Straker (1942-2004) was a historian of science at UBC for thirty years and the chief inspiration for the creation of the STS program. We honor his memory with an annual distinguished lecture.

Stephen was an award-winning teacher and some of his own undergraduate lectures in history of science have been preserved here: